bs.as.stncl is a stencil collective made up of two artists working under the monikers NN and GG. They share backgrounds in printmaking and graphic design.

bs.as.stncl have a long history with the Argentine street art scene, and led the first wave of stencil art in the capital’s troubled streets following the 2001 crisis. Despite deliberately leave their work unsigned, their profile and following has grown over the years and their street work is immediately recognisable.

After an 8 year hiatus since their last solo exhibition, they returned to the mecca of Argentine street art, Hollywood in Cambodia gallery, for “Carton Pintado” (Painted Cardboard). 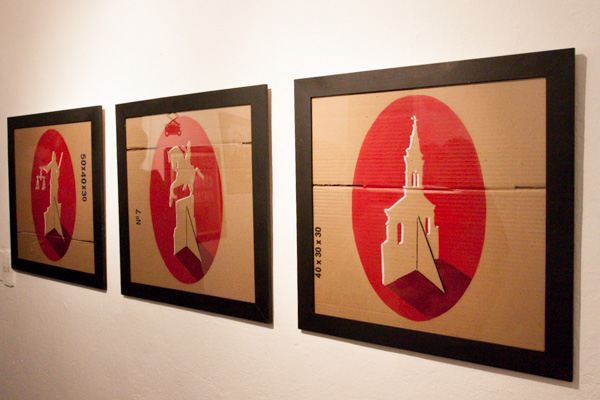 NN: “Carton Pintado” emerged from us playing around with cardboard, sketching and experimenting. We liked the format so much it became the concept for the exhibition. Someone even said to us once (makes a mocking voice) “Ahh this is painted cardboard”.

GG: I liked the idea of using cardboard because it’s a challenge, it’s not an easy material to paint. It doesn’t absorb the colours of spray paint well, it’s really cheap, kind of crappy, it bends, it creases…The idea of creating art with it was fun.

NN: When we began to focus on the exhibition concept, we wanted to elevate the quality of work.

GG: All the works in this show are framed to give an artificial impression of quality, which plays with the original concept.

graffitimundo: Some works have specific messages or images, whilst others have very different themes.

GG: Yeah, we thought it would be fun to play with different shapes and we approached it with the intention of exploiting the technique. For example, there are some works where the drawings are not painted, but left as silhouettes, the form is only implied.

NN: In those cases, we want to direct people’s attention to the interplay between the design and material.

graffitimundo: You once said your work has to have a message, even if it is only understood by you. Do you think that people will understand the message this time? Do they care?

GG: The name of the show is quite specific.

NN: And if somehow people see it and feel let down …

GG: (interrupting) That completes the concept!

graffitimundo: How would you explain the phrase “Carton Pintado” to a foreigner?

GG: There is a phrase in English that means the same thing – “Fool’s gold”. 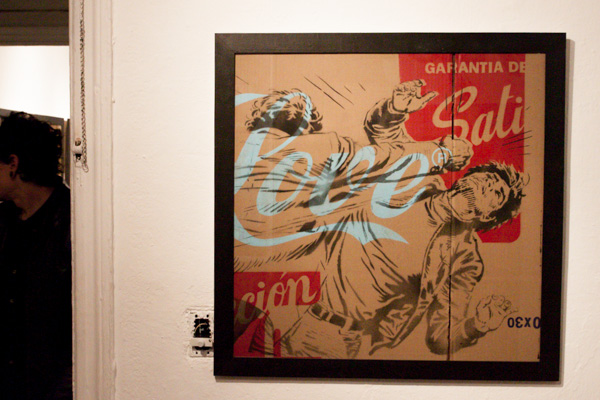 graffitimundo: Do you think the streets are lacking the rebellious stencils of the past? Does it feel noticeable?

NN: The rebellious stencil is there when it’s needed, to accompany any important moment for society. It’s not about rebelling for the sake of rebellion. Anyway, we always liked creating ironic stencils. Maybe now work is being made from an artistic perspective instead of a cynical one.

GG: Maybe we have this need within the collective to focus on irony. But I like the way other artists manipulate the stencil as a tool, for example I really enjoy “gigantism” (i.e. stencils of massive proportions).

Outside of Argentina, bs.as.stncl have been active on the international scene in recent times. In 2013, they were invited to participate in the European festival “Avant Garde Urbano”, sharing walls with renowned artists Vhils and Rodriguez-Gerada.

bs.as.stncl is part of the Hollywood In Cambodia (HIC) collective with artists rundontwalk, Stencil Land and Malatesta. Together they run Argentina’s first street art gallery.

“Carton Pintado” can be visited from Tuesday to Sunday from 18:00 to 21:00hs in Hollywood in Cambodia.

Hollywood in Cambodia
Thames 1885 (in the back of Post Bar)
www.hollywoodincambodia.com.ar