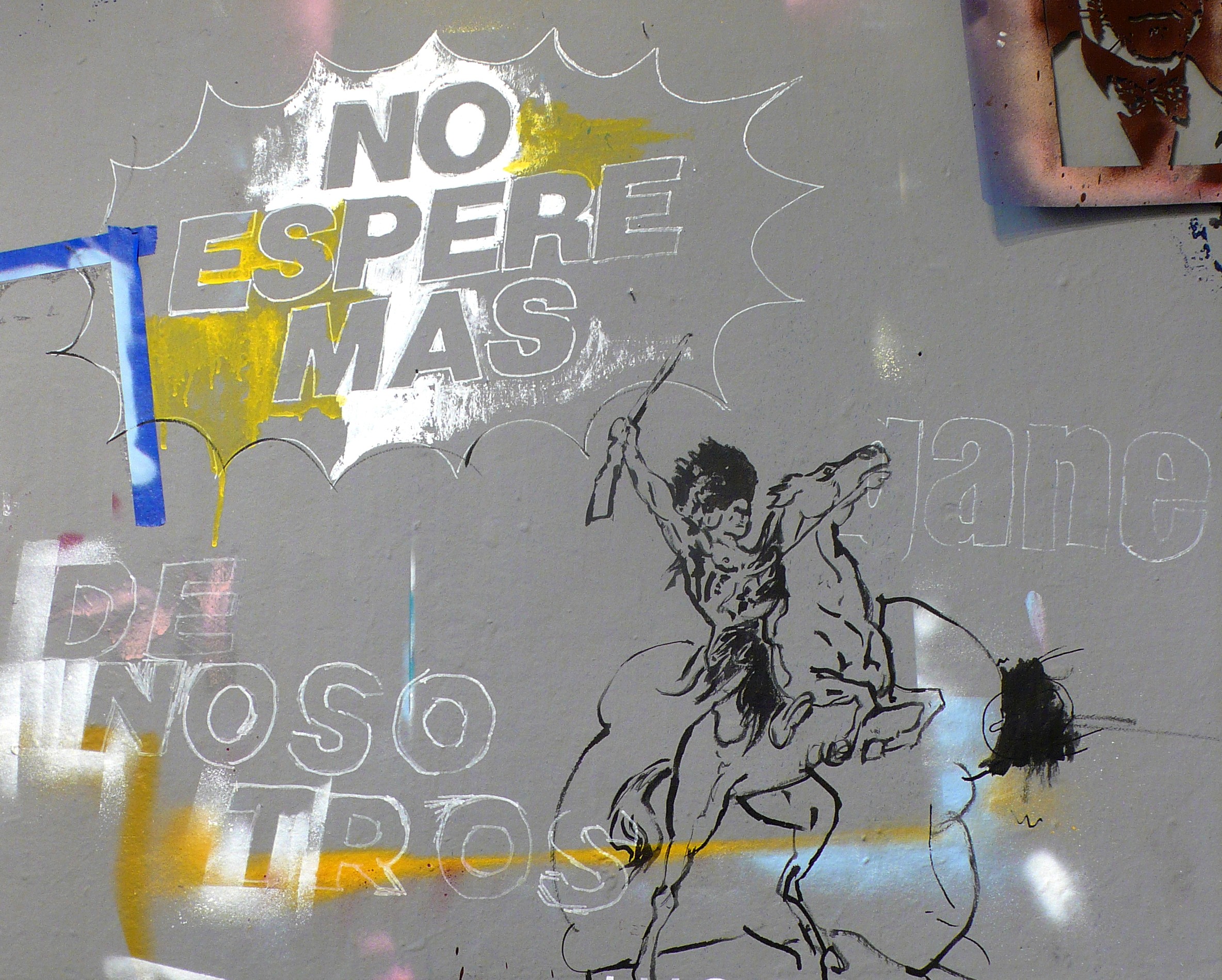 The magic is still intact: 10 years of Hollywood in Cambodia Crüe

We caught up with HIC Crüe in advance of their new exhibition “Fuimos Todos”, which is up at Gallery UNION from December 5 – February 3.

The collective behind the legendary street art gallery Hollywood in Cambodia, HIC is composed of BsAsStencil, Malatesta, RunDon’tWalk, Stencil Land and Tester Mariano. This exhibition comes on the heels of HIC´s 10th anniversary, and is an ode in practice to a decade of collaborative work.

“Fuimos Todos” is a celebration of the collective as a creative concept; something which captures a fundamental element of the nature of urban art, and the ethos at the very heart of this inimitable collective.

Malatesta: I feel like being part of HIC is like being in a band.  You can go out to paint alone, no problem: I can have a guitar in my house and spend all day playing, putting the volume up to 11, jamming. But it’s totally different when you get together with your friend Tester who plays the bass, and your friend GG who plays the drums.

GG: It’s worse, because we all play the guitar. We get along because we do the same thing.

Malatesta: The individual acts in function of the group, which becomes a collective core of truth. All members share the same idea, the same tools; each has his own role but serves a larger design. Like a transformer.

GG: Painting like that makes you step outside of yourself, no matter whether what you’re doing is on the wall or on a canvas.

NN: It’s like the dissolution of an ego into a greater whole.

Tester: It’s because of the fact that it’s shared. It’s not like “I painted this, this is mine”.

Malatesta: It’s the same thing that happens when you paint in the street. Once you put it on a wall, it’s not yours anymore.

Talking through the walls

Malatesta: The great thing about us starting out was the spontaneity of the walls. I recognised their [other HIC members’] graffitis even before I met them in person.

Tester: We met through painting in different lapses of time; one person one night, another person another night. It was a truly collaborative way of working.

NN: Yes, that was the dialogue. There are some walls that I have a lot of affection for, for that reason, because of how they took shape over time. They were in constant development and later I found out that loads of people I know had painted there [where we all went]. It was cool how, seeing the walls, you could really feel the presence of the entire group of people that had created them.

NN: Before we knew each other we were already working together without knowing it.  We were painting side by side, but at different moments, on walls in the street. That philosophy of doing something without covering over someone else’s work, which is so classic in graffiti, is what saved it from becoming typical. There is a Greek word, “palimpsest”, that refers to reusing the same surface over and over, thereby creating layers upon layers of writing. For me, it’s great to keep putting up new stuff in the street but it annoys me when those “time collages”, which I’m so fond of, get covered over.

GG: That’s how we started painting in the street, and that’s why, when we started painting indoors, we had a different relationship with the artwork from a person who, from day one, paints an artwork and sees it as sacred, untouchable. We’re used to the ways of the streets, so it’s common to paint on a wall one day and then the next see that a friend of yours has come along to paint something else.

GG: Nowadays a lot of people paint to make a name for themselves. And if I were starting out today, maybe I would sign [my murals] to let people know that it was me who did it. But at the beginning it was about the game of going out to paint, not about painting to gain recognition. After all, what would have been the point of that?  Who was going to recognise you?  The other four people who painted with you?  Today the recognition makes sense because you do exhibitions, you sell work, people fly you around to paint. But when we started painting there was none of that, so what was the purpose of knowing your name if there was no market for what you were doing?

Malatesta: What’s more, we were more afraid than anything else to sign our names.

GG: What do we think of making it to ten years? Here’s to ten more?!

Tester: No one considered having this space for ten years. I didn’t think we would last three months!

GG: The people that have come through and exhibited in HIC make you feel that they’re part of this in a way that’s bigger than just the six of us. And that’s good because that’s what we wanted it to be: Let the gallery be a place where everyone feels like they belong. It’s a place where the movement has happened rather than just the individual exhibitions of each artist. People appreciate us and they appreciate the space. And if we weren’t having fun, we wouldn’t do it, not for a second!

NN: You know the first thing we called ourselves when we opened was a “Gallery of Images” because we didn’t want to commit to “Urban Art”.  Half of the artists invited to participate in the very first exhibition didn’t paint in the streets. It wasn’t required.

Tester: The space was always open and was never too orthodox. There are six of us and we have to agree, more or less. In turn, the space really belongs to everyone.

GG: HIC’s tenth anniversary just happened to coincide with the arrangement we had with UNION to do the show, and it was the perfect excuse to get us all together.  I think the only thing that has changed since we met is that we’ve become better friends. We know each other better, we’re older, we’ve got bigger bellies. But that’s about it. We haven’t painted together for a long time (since the Toco Madera show in Kosovo gallery, 2012), but when we start painting together again you realize that it’s like riding a bike.

Malatesta: The magic is still intact.

GG: While the creative process is the same, perhaps what has changed is that everyone now has developed their own style. We already know who to count on for specific things, in terms of composition or colors, and at the end you just go on blind faith. There’s also a shared background: We’ve done a lot of things that have always, in our opinion, gone well. I can get angry and start kicking, but I fully trust these guys.

Tester: The important thing is that we are 6 guys who think differently but …it comes together into something good, and that’s fun for us.

GG: What happens with us as a group is that we don’t overthink things. We don’t look forwards or backwards. I think that’s why we’ve lasted so long. It’s always been day to day, show to show, and almost without realising it, and without planning it, we got to where we are.

Malatesta: The best way to celebrate is by painting together.

NN: Any excuse to get together is good for us.

GG: We have stayed tied to the mast. One of the things that I like most is that after ten years we’re still doing everything like we did the very first day.

NN: We haven’t learned anything!