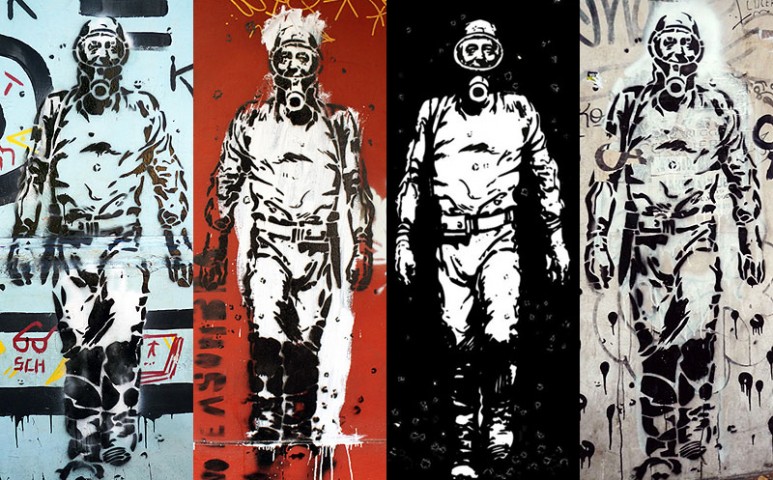 The walls of Buenos Aires have paid homage to Nestor Kirchner in various ways. In the immediate aftermath of his death, the words ‘Siempre Nestor’ were splashed across the city. To mark the one-month anniversary of Nestor Kirchner’s death, the political group La Campora distributed stencils to activists in every barrio of the capital, and the image of ‘El Nestornauta’ began to appear throughout Buenos Aires and beyond.

El Nestornauta is a combination of two images – the  face of Nestor Kirchner, wearing the suit of the classic Argentine comic character “El Eternauta“. The cartoon “El Eternauta” depicted an apocalyptic vision of Buenos Aires, where survivors of a lethally toxic snowfall had to resist an alien invasion. The cartoonist  Héctor Germán Oesterheld explored the themes of war, politics, heroism and sacrifice through the comic, and in later series such as  “El Eternauta Part II” the cartoon became more overtly political.  Osterheld began to take a narrative role within the comic strip, and El Eternauta became an allegory for contemporary Argentina, and openly critical of the military dictatorship.

In 1977 Osterheld disappeared. A year later, his four daughters disappeared. Along with tens of thousands of Argentines who disappeared during the dirty war, they were abducted and murdered by the military junta. Casting Nestor Kirchner as El Eternauta is a clear tribute to his work as a politician and leader, and his role in bringing Argentina out of crisis. But within the image there lies another important tribute to his work in bringing the architects and executioners of the military junta to justice.  The repeal of the “Ley de Punto Final” & “Ley de Obediencia Debida” during Nestor Kirchner’s presidency stripped away the pardons and protections which prevented former junta members from being tried for their crimes. Through this action, Nestor Kirchner ensured that those responsible for the murder of Osterheld and countless others could be brought to justice.

There is a grim irony to the observation that Oesterheld depicted the invading alien forces in El Eternauta as predominantly noble beings, subject to the orders of evil commanders. We can only speculate as to where he would have drawn the line of culpability between those who ordered, planned and carried out his abduction and murder, and that of his children.