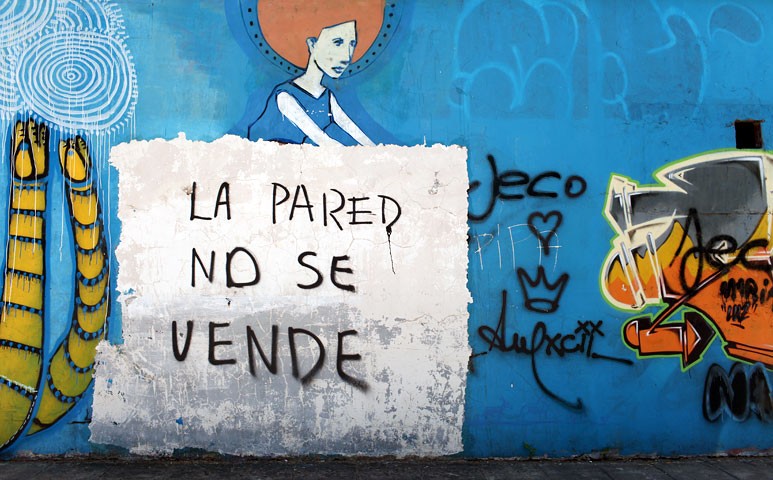 This may be old news for those familiar with the scene, but for anyone who hasn’t heard about it, the story of how street art in Buenos Aires was appropriated by a conceptual artist is an unusual one.

A few years ago, something very strange happened in the streets of Buenos Aires. All across the city, large sections of murals began to disappear.

A few days before the disappearances started, we were running a tour and came across a group of people applying a coating of resin to a section of a mural painted by Bert van Wijk. When we asked them what they were doing, they replied that a gallery had asked them to protect the murals, and so they were going around the city preserving the best pieces. It seemed strange that they would only preserve a section of a mural instead of the whole piece, but they were reluctant to share any more information and quickly left.

A few days later it became obvious that the murals weren’t being protected. They were being removed. The resin applied to the wall was used to create a bond with the surface of the wall and once dried, the resin and paint were peeled away. A flower had been removed from Bert van Wijk’s mural. Sections of other murals started to disappear. In some cases, entire pieces were removed.

It seemed unbelievable, but it was happening – someone was stealing street art. 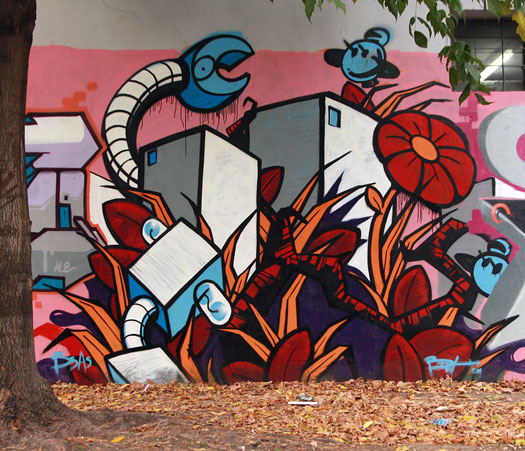 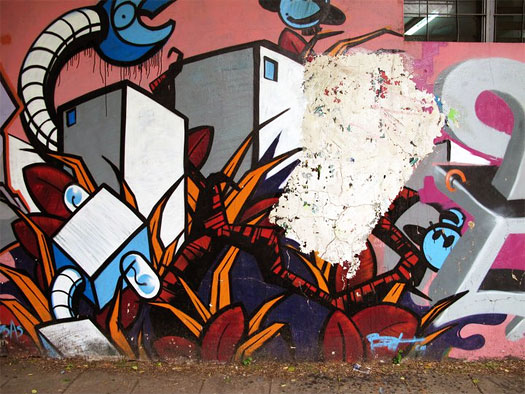 It isn’t unprecedented for street art to be physically detached from the walls. A number of pieces by Banksy have been cut away from urban walls over the years. Some of those pieces sold for six figure prices. Whilst Buenos Aires boasts extraordinary street art, it didn’t seem plausible that someone was stealing it because the pieces were worth huge sums of money. So the question everyone was left with was “who is doing this and why?”

It took several weeks for the explanation to arrive – the pieces were being removed by a conceptual artist, who wanted to use pieces of street art in his own exhibition.

The promotional blurb for the show offered the following cryptic explanation:

The artist “seizes parts of street graffiti – destined to be destroyed either for its exposure to the elements or for its covering with several paint layers – and brings them to the gallery space in an exercise of preservation that comes off closer to a forensic operation rather than to the conservation of fragments of a cultural inheritance.”

Understandably, this explanation didn’t sit particularly well with the street artists affected, or admirers of their work.

From the perspective of local street artists – an outsider had entered their scene and destroyed their art in pursuit of his own project. He had made no attempts to contact any of the street artists whose work he intended on taking. No permissions had been asked. He had simply arrived and started taking whatever he wanted for his own exhibition.

The opening night of the exhibition was discretely publicised. The gallery was full of the appropriated murals, encased in resin and suspended from the ceiling. The pieces were seemingly priced by size, each costing thousands of dollars. Fine wines were served on silver trays by waiters in white gloves. The artist was surrounded by admirers.

Reports on what happened next are a little vague. But the key details are that at some point, a fire extinguisher was set off and people began to evacuate the gallery. And then, amidst the confusion, every piece of stolen artwork in the gallery was destroyed, and those responsible disappeared into the night.

This brought an abrupt end to the exhibition.

It seems plausible that the artist expected some form of reaction. Comments he made on Facebook suggested that he saw the destruction of the pieces in the gallery as a legitimate response that completed his concept. His attempts to vandalise vandalism had been vandalised.

But for a number of reasons, the underlying artistic concept simply didn’t make sense in the context of Buenos Aires. Several of the pieces the artist had deemed to be “vandalism” had been painted with permission. What he had presented as being worthless “street graffiti” had value – to the artists, the owners of the walls and the public.

One particular case stood out – a mural had been ripped from the walls of a private property. Like many other pieces, it had been painted with permission. The mural had been painted at the request of the homeowner, a mother who had asked artists to paint something for her young son. She was understandably furious that her son had woken up one morning to find that his mural had been “seized”. 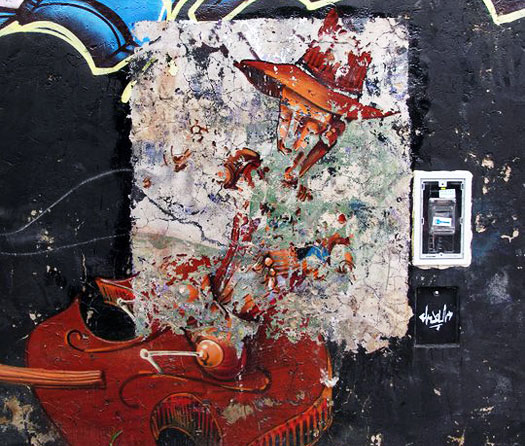 The artist should have researched the scene before carrying out his conceptual project here.  If he’d spoken to any local street artists they could have told him that their work isn’t generally considered to be vandalism. One of the defining characteristics of the scene here is its public acceptance, which is built upon good relations between street artists and the community. It’s common for artists to knock on doors and ask permission before painting, and people all too happily offer up their walls.

In the days following the short-lived exhibition opening, the artist found himself denounced by an angry public and an unsympathetic media. A similar exhibition that had been planned in Sao Paolo was cancelled. Many of the street artists affected made public demands that their paintings be returned. Property owners who had murals removed from their walls began discussing legal action.

It’s possible that unsanctioned attempts to strip art from public and private walls for personal gain might be condoned in other countries, but it’s hard to imagine where it wouldn’t be seen as unethical, not to mention an obvious breach of the artists & property owners rights.

We spoke with an Argentine intellectual property lawyer about the incident. She explained that in Argentina, the artist is the ultimate owner of their artwork. They decide who gets to use their artwork and how. That artists choose to paint in public is irrelevant. It doesn’t even matter if artwork is created without permission. An artist who paints without permission may be held responsible for property damage, but they are still the owner of their art.

Artists who paint in the street want people to see their work. They accept that the passage of time and the weather will inevitably degrade their work, and other artists and writers may paint over it. This is the natural cycle, and the conditions artists accept when they paint in the street. However, it doesn’t follow that by painting in the street, artists are giving permission to others to use their art for their own commercial or private gain. Their art doesn’t become public property simply because it is in public view.

Whilst the technique of physically removing art from the walls was unusual, appropriation of street art is nothing new.

Over in the US, a major retailer was recently ordered to pay damages and hand over their entire stock of t-shirts to a street artist whose design they had ripped off.

Whilst many street artists value the exposure print media brings to their work, an interesting article in the New York Times highlights a case brought against a photographer who had created a book featuring street paintings. Not only were artists unhappy that their work had been commercially reproduced without their consent – several objected to how their art had been presented. Based on the complaints raised by the artists, the book was withdrawn from circulation a month after its release, and damages are being sought.

Ironically, several Buenos Aires street artists whose pieces had been stolen appreciated the concept behind the exhibition. What they didn’t appreciate, was the fact that they were never consulted or included.

As urban art becomes more established, its creators are increasingly aware of the rights they have over their art. Their art may be shared with the world in full public view, it may be ephemeral and it may even constitute vandalism. But it is still their art.