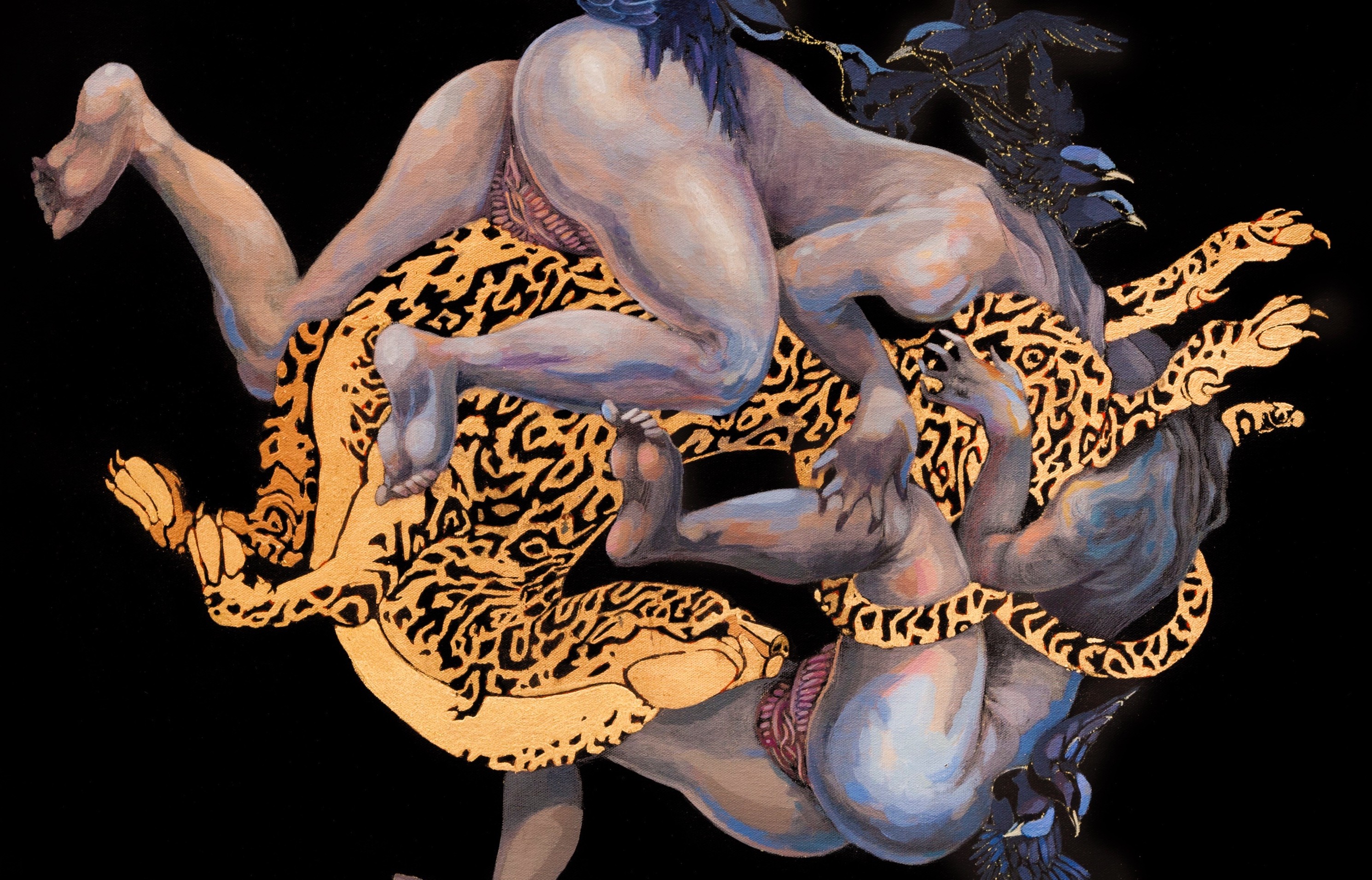 We spoke with Georgina Ciotti ahead of ‘Alquimia’, which opens Friday June 10th at UNION Gallery. In this exhibition the artist contemplates the dichotomy of human nature and animal instinct in a striking collection of original artworks, which center on the concept of alchemy as a metaphor for self-transformation and material metamorphosis in the creation of artwork.

‘Alquimia’ is my first solo show.  I never wanted to do one before because I didn’t really like the idea of exhibiting my work. I feel like now it’s a good opportunity, and UNION seemed like a good place, since for me it depends a lot on the energy and the relationship I have with the people I’m doing the project with. When I choose to do a mural, I have to have a good vibe with the client as well, so for me it’s the same when I choose to work with a gallery.

A lot of my experiences from my time in Misiones, Argentina have become part of the concept for this show. I went on a trip to Misiones for a month after my mother died, to be in the middle of the jungle with someone from my childhood that lives there without electricity and without running water, in these cabins he built there. It was a very intense time for me.

In Misiones you’ll find the Ocelot and the Sai. The Ocelot is a small feline, and the Sai is a blue bird. The friend I stayed with asked me to create a piece for him when I was there so I started working with these animals, which are indigenous to that region.

For me, alchemy encompasses everything; from the terrestrial to the spiritual. It can also represent the dualities of masculinity and femininity, as well as the volatile and the corporeal. Alchemy is about a search, rather than concrete answers.  My experience in Misiones transformed me, but I think these transformations are happening all the time. Alchemy is like a fractal, it’s everywhere but we’re not aware of it.  The creative process is an alchemy. You see the artist’s materials, and then how these get transformed into artworks.

In this exhibition, the viewer reconstructs the pieces themselves, participating in artworks that play with the limits of the abstract and the figurative.  I’ve been doing a lot of research on neuroscience and human behaviour, and in these pieces are references to the famous Rorschach ink blot tests.  Some of the images in the artworks are mirrored, causing the viewer’s perspective to shift between seeing something figurative or something more symbolic and cultural.  In one piece you might see the face of a tiger, or an African mask, while internally they’re really other things.

I started painting in the street because I didn’t have any space to paint indoors.  I was living in Barcelona in a shared flat so I started there, it was more free then. Over time my work changed, the street always changes you.

I think of a mural like a type of oasis in the desert. I’ve had moments where I just want to create some beauty in the street, leaving behind something that people will stop and look at, in order to generate a place where people can be at peace for a moment.

The street art scene in Buenos Aires today is very trendy. When I returned in 2010 after living for a decade in Barcelona the scene was very open and now it’s really fashionable.  It would be great if we could prevent it from being absorbed further by the system. On one hand I feel like true street art is dead, but on the other I think it’s nice what’s happening, because there are lots of people painting and with so much freedom, which doesn’t happen in a lot of countries. But spaces are also becoming more regulated.

People have a philosophy about their work, but then at the same time you are forced to negotiate with reality, and that can result in contradiction. For example with street art festivals, they give you a space to paint, but it’s controlled.  Festivals are great promotion, and they make you a star, but there’s a compromise that you have to make.  I’ve done it before and it’s great, because you’re surrounded by friends and colleagues, and you learn a lot from everyone else, but I would never put myself in a position where my work is censored. I’ve always done what I wanted.

The streets are a good place to exercise your political rights. The situation right now makes me think of what you see in the U.S.,  where they give people a special place to protest, so that you ultimately need their permission to express yourself.  I think that a place where you see the walls painted is a place where the people are active and involved socially.

Art is a representation of the paradigm of the times, and i think that at the moment art is becoming more holistic, and that reflects what’s happening in the world.